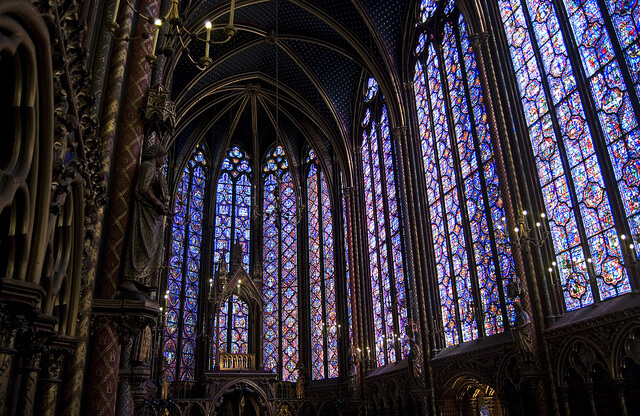 The immaculate stained glass windows at Sainte Chapelle in central Paris known as one of the Gothic wonders of medieval times has been restored after seven years of intricate work.

The completion of the restoration marked the 800th anniversary of the birth of King Louis IX, who commissioned the chapel in the 13th century that was to house his collection of religious relics.

The process involved dismantling the huge stain glass windows into small panels and cleaning them with lasers. An outside skin of glass has been fitted onto the windows to protect them from pollution, while not altering the look.

The chapel is one of the oldest remaining buildings on the Ile de la Cité, along with the Conciergerie.

The two-level building, built in the 1240s, is a spectacular example of the Rayonnant style of Gothic architecture, accented with stonework and 15 grandiose stained glass panels and a rose window added a century later.

The stained glass windows which measure in at 6,458 sq. ft. are located in the upper chapel and illustrate biblical scenes from both testaments. They are ornate and visually abound in deep red and blue, while depicting some 1,130 biblical figures.

Over time, the chapel has suffered several fires and one flood, however most damage was incurred during the French revolution when its spire was removed and the relics scattered. Some of the relics were recovered and now reside nearby at the Notre Dame cathedral.

The Sainte-Chapelle had been converted into administrative office and archives, and some windows were removed to give more light. Those that remained were nearly hidden by enormous filing cabinets which, helped preserve them.

The chapel was left to decay, and was a sorry site by the mid-19th century, and eventually underwent restoration in 1836 based on drawings and descriptions of the original structure.

The royal palace that once resided around the chapel has long disappeared and it is now surrounded by the Palais de Justice. The Conciergerie, located next door, is where Marie Antoinette was held before being taken to the guillotine.

The chapel is estimated to attract more than 900,000 visitors a year.