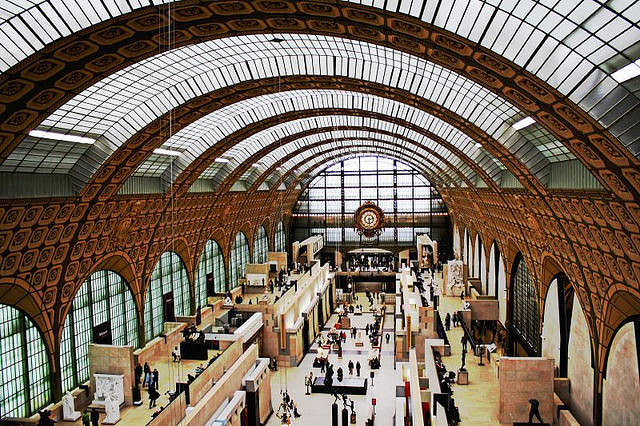 At the top of every visitor’s must-see list is the Musee d’Orsay. The history of the Musee d’Orsay particularly of its building is unusual. In the center of Paris on the banks of the Seine, the museum was installed in the former Orsay railway station that was constructed for the Universal Exhibition of 1900. The building itself could be seen as the first work of art in the Musee d’Orsay, which displays collections of art from the period 1848 to 1914. It houses the largest collection of impressionist and post-impressionist masterpieces, by painters including Monet, Degas, Renoir, Cézanne, Gauguin and Van Gogh.

The transformation of the railway station into a museum was accomplished by ACT architecture group, whose project was chosen in 1979 out of six propositions. The project highlighted the great hall, using it as the main artery of the visit, and transformed the opulent glass awning into the museum’s entrance. The museum is organized on three levels. The ground floor galleries are distributed on either side of the central hub, which is overlooked by the terraces of the median level, that expand into additional exhibition galleries. The top floor is installed above the lobby and covers the length of the Quai that continues into the highest elevations of the former hotel. The museum’s exhibition spaces are distributed throughout the three levels which are the pavilion Amont, the glass walkway from the former station’s western pinion, the museum restaurant, and the Café des Hauterurs, the bookshop and the auditorium.

ICWERC 2015: XIII International Conference on Wildlife Ecology, Rehabilitation and Conservation Paris collaborates with other nations by hosting an international...