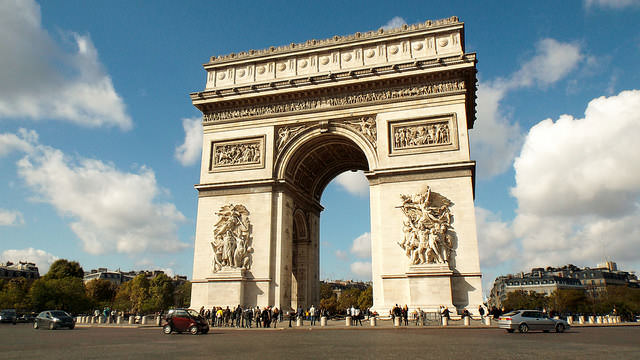 The Arc de Triomphe is located at the center of Place de l’Étoile, the hub where 12 grand avenues radiate to form the star for which the Place de l’Étoile is named. The Arc’s panoramic viewing terrace is the best place to admire the geometry of Paris’s urban plan, devised by Baron Georges-Eugène Hausmann. Rows of neatly trimmed trees line each avenue adding to the effect. From here you can also see the Eiffel Tower in its entirety.

Napoleon I had an ambition to make the capital of his empire the most beautiful city in the world.
On May 11, 1806 the project began by architects Chalgrin and Jean-Arnaud Raymond and on August 15, 1806 the first stone was laid to coincide with Napoleon’s birthday. It took over two years to lay the foundations.

The inside walls of the monument lists the names of 558 French generals with the names of those who died in battle and additionally inscribed on sides the four supporting columns, are the names of the major battles of the Napoleonic wars. The Tomb of the Unknown Soldier from World War I rests beneath the Arc. It was originally decided November 12, 1919 to bury the Unknown Soldier’s remains in the Pantheon, but a public letter-writing campaign led to the decision to bury him beneath the Arc instead. On Armistice Day 1920, it has the first eternal flame lit in Western Europe since the Vestal Virgins’ fire was extinguished in the year 391 and it burns in memory of the dead who were never identified in both World War I and World War II. The coffin was put in the chapel on the first floor of the Arc on November 10th 1920 and put in its final resting place on January 28th 1921. The slab above carries the inscription “Here lies a French soldier who died for his fatherland 1914-1918”.

The French Parliament declared every year on November 11 a ceremony is held in commemoration of the anniversary of the armistice, which was signed between France and Germany in 1918.  Many famous victory marches have led past the Arc de Triomphe including the Germans in 1871, the French in 1918, the Germans again in 1940 and the French and the Allies in 1944 and 1945.

In this installment of Best Paris Hotels, we explain what you could expect to experience in a Parisian hotel. Does...