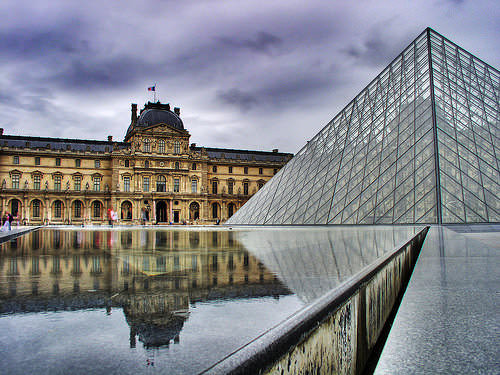 The Musée du Louvre is noteworthy for being the main entrance to the uniquely shaped Louvre Pyramid – designed by the Chinese-born American architect IM Pei. The Louvre is one of the world’s largest museums and historic monument. As a central landmark of Paris, it resides on the Right Bank of the Seine in the 1starrondissement district. The Louvre exhibits nearly 35,000 objects from prehistory to the 21st century over 652,300 square feet. The museum is housed in the Louvre Palace which was constructed as a fortress in the late 12th century under Philip II. In 1682, Louis XIV chose the Palace of Versailles as his residence leaving the Louvre to display the royal collection. The museum opened on August 10, 1793 with 537 paintings, the majority of those works being royal and confiscated church property. To date The Louvre exhibits sculptures, object d’art, paintings, drawings, and archaeological treasures.

The sheer size of the Louvre can be overwhelming. There are an array of innovative, entertaining self-guided thematic trails ranging from a Louvre masterpieces trail to the art of eating, plus several for kids. For many, the star attraction is Leonardo da Vinci’s La Joconde, better known as Mona Lisa. This entire section of the 1st floor of the Denon Wing, is hung with many astonishing masterpieces.

The Louvre is the world’s most visited museum, averaging approximately 15,000 visitors per day, 65 percent of whom are foreign tourists.